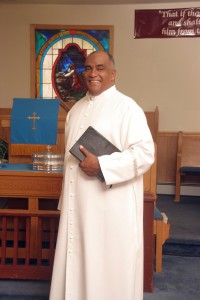 Elder Paul Brown is the fourth of seven children born to the late Deacon William N. Brown and Evangelist Florence B. Newman Brown, original members of House of Prayer Church of God, No. 4 in Charles Town, West Virginia.

“Pastor Paul” was educated in the public schools of Jefferson County-attending Grandview Elementary, Harpers Ferry Junior High, and Shepherdstown High School, respectively, and played on the football and track varsity teams at Shepherdstown. He graduated from Shepherdstown High School and that same year enrolled at Shepherd College. At Shepherd, he earned a Bachelor of Arts Degree in Health and Physical Education, and later a Masters of Arts in Secondary Administration and Supervision from Virginia Tech in Blacksburg, Virginia.

During his childhood days he, along with his siblings, played church at home and at an early age his role was always “the preacher”. He was also dubbed “My Little Bishop” by the House of Prayer church founder, Bishop James P. Simms.

Always having an interest in young people and a real love for the young people’s conference, he was installed as President of The Young People’s Conference in 1976 and served in this role for 22 years.

Over the years, Pastor Paul served faithfully under the former pastors, Elder Robert E. Taylor and Bishop Walter E. Newman, respectively. His roles included that of choir member, usher, Sunday School teacher, deacon and minister. In July 1998, he was installed as Pastor of House of Prayer Church of God No. 4.

Pastor Paul is a retired Principal from Daniel Morgan Middle School in Winchester, Virginia after serving a total of 33 years in the field of education in roles as Teacher, Coach, mentor and Assistant Principal at John Handley High School, all within the Winchester School System.

After remaining retired for all of 6 months, he would later become Principal of the 9th Grade Complex and subsequently Principal of Wildwood Middle School in Shenandoah Junction, West Virginia. He has since retired from the Jefferson Co. West Virginia School System after 5 years of service.

With his retirement, he plans to continue to “grow” the church, serve in the community, and continue his work on a degree towards Master of Church Administration through the Newburgh Theological Seminary and College of the Bible.

Pastor Paul is the president of the Black Clergy Association of Jefferson County. He created the Angel Fund at Wildwood Middle School, and has been blessed to be the recipient of many civic and service awards.

He is married to Evangelist Dale Parran Brown; has two children, Justin and Kendra; one daughter-in-law, Angela; two grandsons, J-Paul and Austin; and one granddaughter, Aubree Marie.

This is a man of God who not only loves God, his family and the church, but consistently encourages the church to “reach beyond the walls” for those outside of the church.